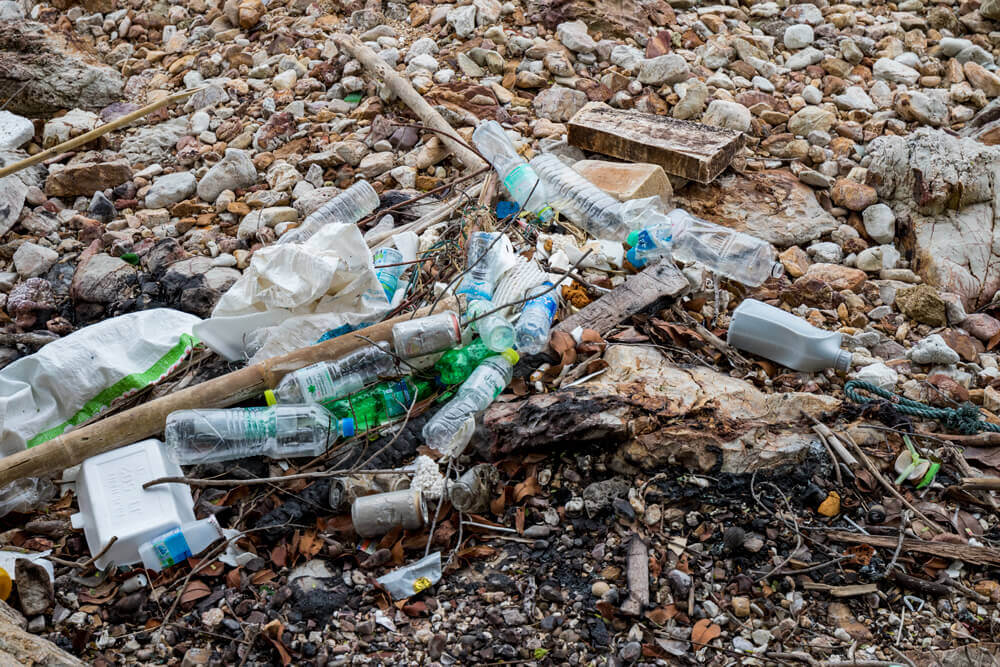 The obsession with single-use plastic water bottles has hit catastrophic proportions. While organizations and scientists are straining to calculate how consumer habits are affecting the health of the planet, some blatantly negative returns are in plain sight as plastic water bottle waste spirals out of control.

The Ocean Conservancy highlighted the severity of the problem in 2016, when the organization set out to clean coastlines across the world during its annual International Coastal Cleanup (ICC), as part of the planet’s largest volunteer effort to help clean the oceans. The data that came from the litter collection in 2016 raised alarm around the globe.

The 2016 ICC report calculated a cleanup of roughly 1.58 million plastic beverage bottles along 14,997 miles of coastline. If you stacked all these plastic bottles, you would have a structure 372 times higher than the tallest building in the world: the Burj Khalifa in Dubai (828 meters).

The numbers since that report was released have gotten worse, culminating in 2019 when ICC volunteers collected more than 1.88 million plastic bottles.

What about the water itself? The production of a single-liter bottle takes 2 liters of water. Add another liter to fill the bottle and you’re at a 3:1 liter ratio on water used to fill just one bottle.

Is what’s in bottled water the same as tap water?

Some bottled water brands market an elaborate, fictional narrative about where their water comes from. They may say their water starts in a cloud, gets filtered through volcanic rock that’s been untouched by mankind and then is bottled in its purest state. However, a large portion of bottled water consumed in the United States is nothing more than filtered tap water.

The EPA sheds more light about bottled water, stating: “All our drinking water comes from similar sources, either from sources we can see, such as rivers and lakes, or from sources we can’t see, such as underground aquifers.” In fact, according to a 2018 report from the advocacy group Food & Water Watch, 64% of bottled water comes from municipal tap water — the same source that delivers water to most sinks at home.

A lot of bottled water is provided via common filtration methods. Reverse osmosis, distillation and ozonation are a few of the techniques used, and they are not exclusive to bottling companies, as people can filter their own water at home, too.

Bottled water companies have come under fire for purchasing land, or the rights to land and water, to extract water from the environment. Now known as BlueTriton Brands, Nestlé Waters North America found itself in hot water in 2015 after taking 36 million gallons from a national forest in California while the state was battling a historic drought. BlueTriton and government officials in California have been sparring for years over the state’s water resources.

Adding a reverse osmosis system in your home is a terrific alternative to relying on bottled water. Drink great-tasting water without all the plastic waste. 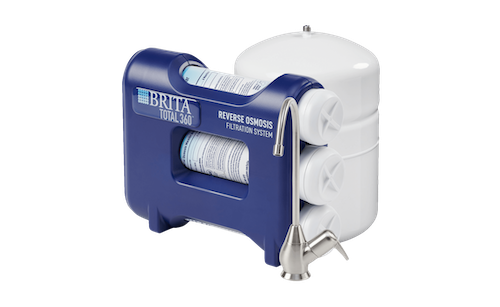 When walking into a convenience store during a road trip, you understand purchasing the bottle or case of water in the cooler is not the best economic decision for your bank account. However, some people buy a bottle or case for convenience anyway. And that convenience costs about 3,000% more than using municipal tap water at home.

After consumption, a lot of that plastic won’t go to a recycling center, and even less will actually be recycled, contributing significant plastic water bottle waste into the wild.

Why are plastic bottles not being recycled?

This stage of the life cycle of bottled water often goes unnoticed. Only about 9% of all plastic waste produced has been recycled, according to UNEP. Many types of plastic aren’t being recycled, and are instead placed in landfills, or burned or stockpiled.

There are several reasons for this. Much of the plastic waste created in the United States is exported to foreign markets for recycling. The waste that isn’t exported oftentimes can’t be processed efficiently due to the country’s lack of processing plants in comparison to the number of recyclable items produced. These plants are privately owned and expensive to run. Operating a recycling process plant is simply not good business, therefore there aren’t enough of them to handle capacity.

Plastic water bottle waste that’s meant to be recycled often ends up in a purgatory of sorts. Recyclable plastic items aren’t broken down at a sufficient rate, so they sit and collect in warehouses and landfills. According to The Balance, it takes 6 months for an orange peel to degrade and 5 years for a milk carton. How long does it take a plastic bottle to degrade? 450 years.

The World Count calculates that anywhere from 60-80% of marine trash is plastic. How much plastic is that? According to UNEP, 11 million metric tons of plastics end up in the ocean each year — the equivalent of a garbage truck per minute. 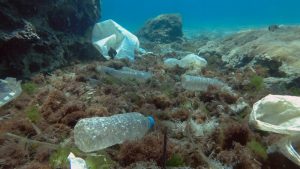 Birds are attracted to bright and reflective objects because they believe it’s food. Pieces of plastic trigger the attention of birds which leads to startling facts and trends, like 99% of seabirds will have ingested plastic waste by 2050.

Scientists have found what’s called nurdles — small pellets of plastic used to manufacture plastic products  — in many seabirds. Nurdles appear during the decomposition process of plastic and they spread in the water and are carried across the globe by currents. Some wash up on shore and can be found on numerous beaches.

Whether nurdles are on land or in the sea, animals are consuming this type of plastic. According to the National Oceanic and Atmospheric Administration (NOAA), 700 species of marine animals have eaten plastic.

The Great Pacific Garbage Patch is a concentrated area in the Pacific Ocean where great sums of garbage, including plastic, has collected. The patch consists of multiple gyres, which is a system of ocean currents. These currents have brought together trash in the ocean to create a patch twice the size of Texas. However, this isn’t a floating island of trash, the Discovery Channel’s “The Swim” explains it as more of a smog of microplastic particles.

Single-use plastic packaging is largely responsible for the creation of this giant field of ocean pollution. In fact, by 2050 scientists estimate there could be as much plastic as fish in the ocean.

Contributing single-use plastic bottle waste doesn’t have to be in your plans. Eco-friendly options, such as reverse osmosis (RO) systems, can be installed in your home, providing great-tasting drinking water that’s the same quality as many bottled water brands. Long term, making the switch will save money and help decrease the size of humanity’s global plastic footprint.

Do the environment, yourself and your wallet a favor by installing a water filtration system in your home. Use EcoPureHome’s interactive shopping guide to find a recommendation for your water needs. 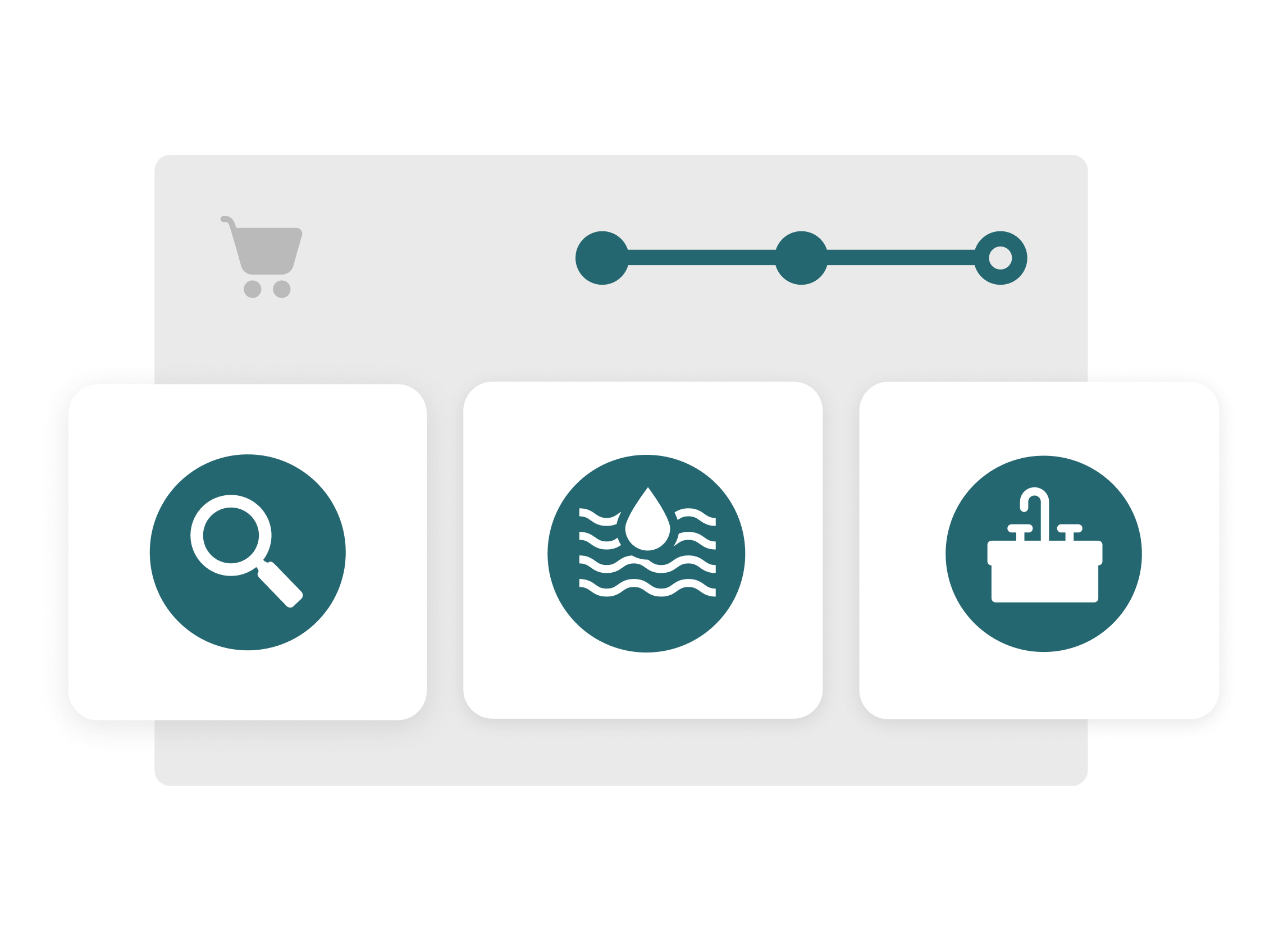