Free Shipping on All Orders | Read the Updated Shipping Notice

Back to All Resources > Health-Focused

Which Cities Have the Hardest Water in America?

Water Hardness Map of the USA

Do you have hard water in your area? Explore the map to find out! 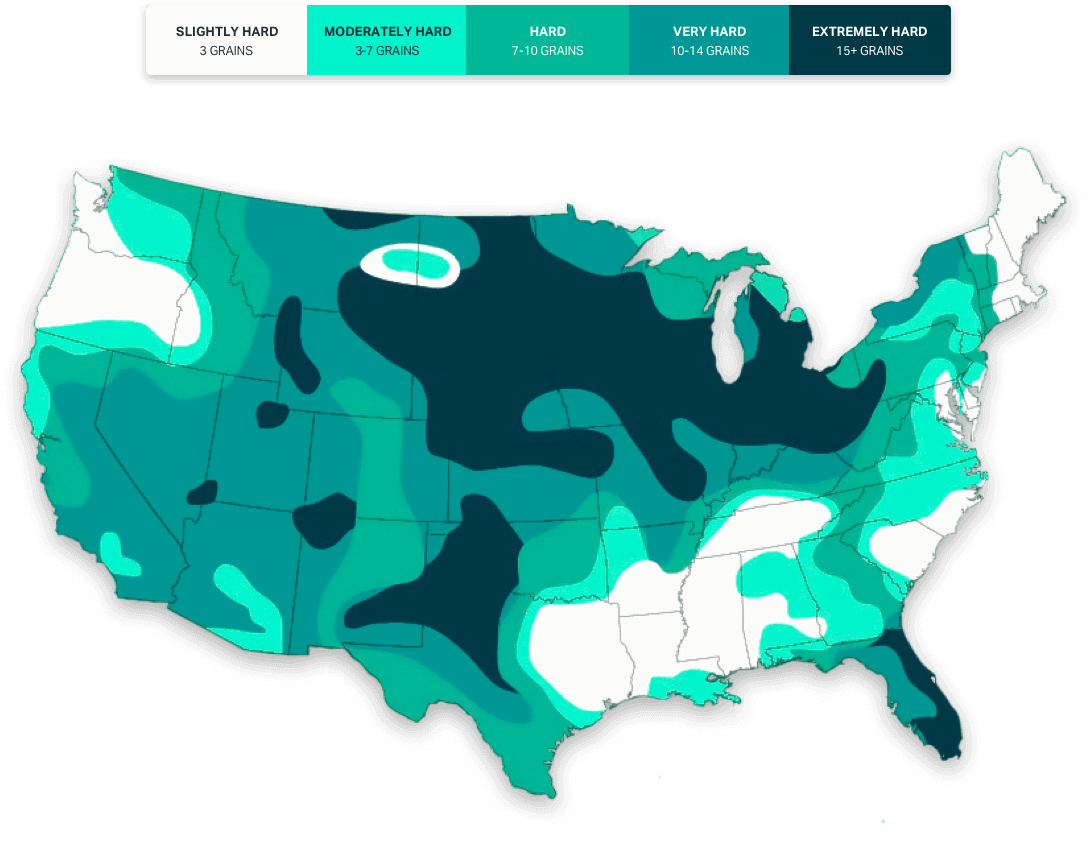 Many regions of the United States experience problems with hard tap water, but some cities are more prone to the issue than others. If you live in one of the cities below, there’s a good chance the water in your home requires a softening solution.

The Indianapolis area faces issues with water hardness, so residents rely on in-home softening solutions to remove high levels of calcium and magnesium. Municipal water sources in the region include both surface and groundwater, both of which may contain water hardening minerals. In Indianapolis, water hardness levels range from 12–20 grains per gallon, which is very high compared to the majority of the nation.

Whether sourced from creeks, streams, rivers, reservoirs or aquifers, challenges with water hardness arise from the fact that much of Indiana lies on limestone bedrock. The pipes underneath Indianapolis absorb microscopic minerals from this limestone, which make their way to the water supply that enters homes. If you are an Indianapolis resident who has noticed your skin is itchy or your dishes are spotty, it may be time to purchase a water softener.

Las Vegas is known for its casinos and entertainment, but it’s the area’s hard water that affects homeowners on a daily basis. With an average water hardness of 16 grains per gallon, the calcium and magnesium that exist in Vegas water stay in Vegas water — without a capable water softener.

So what’s the reason for water hardness in Las Vegas? The area sources 90% of its water from Lake Mead, a body of water located just 24 miles southeast of the Las Vegas Strip. The mineral-rich Colorado River feeds Lake Mead, picking up calcium and magnesium along its path. What starts as soft snowmelt becomes hard water by the time it reaches the lake, and local municipal water filtration does not remove these minerals.

Hard water is a challenge that many Minnesotans deal with on a daily basis. Fortunately, not all Minnesotans face issues with hard water. The Mississippi River, a water source for a large number of Twin Cities residents, provides softer water than those who rely on groundwater. While much of the water that makes its way down the mighty Mississippi flows above the rocky surface, water from the ground absorbs minerals from the area’s natural limestone bedrock.

If you do happen to reside in an area with high water hardness levels, it’s important to take action to prevent discolored dishes and clogged skin pores. A salt-based water softener is the most effective solution for this issue, and you are likely to notice an immediate difference in your water following an installation. The Minneapolis area may be home to hard water, but residents don’t have to resort to a long-distance move to fix the problem.

Phoenix-area residents are all too familiar with the effects of hard water. In kitchens across the region, you’re likely to find appliances coated with a chalky residue, hinting at the presence of hard water. This is because the majority of Phoenix-area water originates from mineral-rich reservoirs. The Colorado, Verde, and Salt Rivers feed these bodies of water and are the true culprit of the area’s high calcium and magnesium concentration in tap water.

If your home’s water seems to have a problem with hardness, installing a softener can extend the life of your appliances, keep your skin looking healthy and prevent the discoloration of dishware. With an average water hardness of 12–17 grains per gallon in the city of Phoenix, it’s no wonder many residents turn to softening equipment in their homes.

In the Lone Star State, residents of San Antonio and Austin regularly contend with hard water issues. In fact, the region is home to some of the hardest water in the nation, with levels measuring 15-20 grains per gallon. In order to understand this problem, it’s important to look at the type of rock that lies below much of Central Texas — limestone. As water in the area comes in contact with limestone, it absorbs a variety of minerals, including calcium and magnesium that lead to water hardness.

If you live in Central Texas and you’ve noticed your water is leaving stains on your appliances or leaving your skin feeling itchy, it may be time to install a water softener. This equipment provides many benefits, but one of the most obvious is that it can make cleaning easier. Hard water leaves behind a residue that is much more difficult to remove than it is to prevent from forming in the first place. Take action against hard water now, and you’ll be thankful later.

Although Florida is home to a large number of natural lakes, the fresh water in the state is susceptible to water hardness. The Tampa area, in particular, presents water softening challenges that are less common in areas like the Panhandle or Jacksonville. The vast majority of this metropolitan area’s tap water originates from groundwater, and as it passes through mineral-rich soil and stone, calcium and magnesium dissolve into the water supply. Although high levels of rainfall help to dilute the water, hardness still often fluctuates up to 17 grains per gallon.

Living in Florida is all about adapting to the elements. Just as air conditioning has made building interiors more bearable, water softeners lead to water that is more practical for life at home. A water softener removes the problematic elements in hard water, protecting your dishes, appliances, pipes and even your health from the negative effects of hard water.

Southern Californians live in one of the world’s mildest climates, but unfortunately, not all of the tap water is quite as pleasant to use and consume. Hard water from municipal water sources is common throughout the Los Angeles area, and while it does not pose a health risk, hard water is a significant nuisance for anyone who’s spent time scrubbing away its stubborn residue. For many in the area, the Colorado River is the main culprit of hard water, as public water sources do not filter out its high calcium and magnesium contents.

The good news for Los Angeles residents is that water softeners present a simple solution to water hardness problems. Not only do salt-based softeners effectively remove problematic mineral concentrations from tap water, but they also use very little energy to do so. In the long run, that’s great for both your wallet and the environment.

The Windy City is home to a pesky problem — hard tap water. Residents are up against higher-than-average concentrations of calcium and magnesium minerals from local tap water, and it can lead to costly issues at home in the long run. Dishwashers, washing machines and sinks are all susceptible to staining from hard tap water in the Chicago area. Those who get their water from groundwater sources have a higher risk of hard water because the rock below the surface throughout most of Northern Illinois has a high concentration of minerals. Calcium and magnesium make their way into subterranean pipes carrying tap water, and these are the main causes of water hardness.

If you suspect an issue with water hardness in your home, it’s time to take action. While you’re not putting your health at risk by consuming hard water, you could be doing damage to your wallet. Appliances that use hard water have a reduced lifespan, and they are not usually cheap to replace. A water softener is an investment for the future, and it’s one that many Chicago residents feel they cannot live without.

Sacramento residents get their water from two main sources: groundwater and local rivers (most notably, the American River). Those whose water supply originates from groundwater have a higher chance of experiencing hard water issues in their homes, and if you’re among this group, you may want to consider purchasing a water softener to tackle the issue once and for all.

If you have noticed your skin feels itchy after a shower, or there is chalky residue below your faucets, you could be facing a hard water problem in your home. On the bright side, a simple water softener installation is all it takes to resolve the issue. Once your softener is in place, you’re sure to notice a difference in the quality of your water.

The hard water minerals in these areas of America can do some serious damage to your home and skin. If you live in or near one of these cities, you should consider installing a water softener. Use our guided shopping tool to help identify the perfect system for your home.