Why Does My Water Smell? 6 Common Smells & Their Causes

Bad-smelling water is a problem that can arise with no warning. Tap water with a foul smell can hurt your personal hygiene habits, ability to host guests, and even your basic hydration habits. Here are a variety of different scents you may be smelling from the faucet: 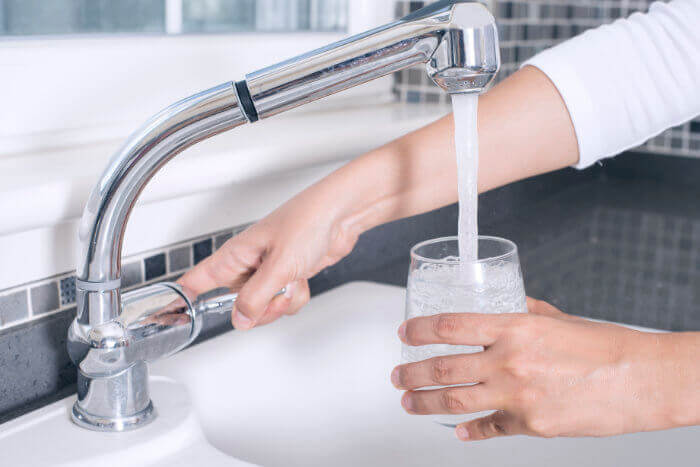 So why does your water smell? Let’s dive into the causes and solutions to these smelly water issues.

When the aroma of dirt, grime and waste strikes your water supply, the smell can be appalling and insufferable.

The sewage smell you’re experiencing can be caused by several factors. It could be the bacteria left by food and soap in your drain. You might think you’re smelling sewage from your faucet, but it could be the scent of bacteria in your drain, resulting in your sink generally having an unpleasant smell.

Another reason your water smells like sewage could be the water in your water heater has been left unused for too long. Were you away from home for an extended period of time and shut it off to save energy? The smell could be originating from the bacteria that was harvested in the lower temperatures while the water heater was turned down or off. The smell can become quite pungent.

Pour two glasses of water from the faucet—one from the cold tap and one from the hot side—while plugging your nose. Walk away from the sink with the water glasses in hand, then take a whiff from each once you’re in another room. If the water in both glasses smells normal, the odor is likely coming from bacteria build-up in your sink drain.

To remove the smell emanating from your drain, pour ¼ of a cup of baking soda down the drain followed by ¼ cup of white vinegar. It’s going to bubble, but let this continue for 10 minutes. While waiting, boil a pot of water and then pour the hot water into the drain. This will disinfect your pipes and remove the foul odor.

If the water smell is from the hot tap only, it’s recommended you flush and disinfect your water heater with a chlorine bleach solution, which a water treatment professional can help with.

A water treatment professional can also test for contaminants and hydrogen sulfide if disinfecting the water heater doesn’t resolve the problem. The smell of sewage can often be mistaken for hydrogen sulfide, or rotten egg smell, which you’ll learn more about in the next section.

If your water smells like rotten eggs or sulfur, not only will it be too pungent to enjoy, it’s recommended you don’t drink it.

If your water smells like sulfur, it could be because of the presence of sulfur bacteria or hydrogen sulfide. The bacteria feast on decomposing organic matter, which leads to the creation of hydrogen sulfide gas, which becomes trapped in the plumbing system.

Sulfur bacteria alone is not a threat to your wellbeing, but it promotes the growth of other harmful materials such as iron bacteria that can clog wells, plumbing and irrigation systems. Elevated levels of hydrogen sulfide can harm you by causing nausea, headaches, delirium and convulsions.

If the smell is only coming from warm or hot water out of the faucet, it’s most likely your water heater. If this is the case, contact a water system professional to replace your magnesium anode. This attachment is connected to a plug on top. Replacing the original anode rod may cut the production of hydrogen sulfide gas at the source. However, the rod’s removal will most likely decrease the life expectancy of your water heater.

You can also use a chlorine bleach solution to flush the water heater. This solution can be tricky, so proceed with caution. It’s recommended you consult with a professional for assistance.

If the scent emerges when either warm or cold water is running, it could be coming from one of these two sources:

Get rid of the rotten egg smell. 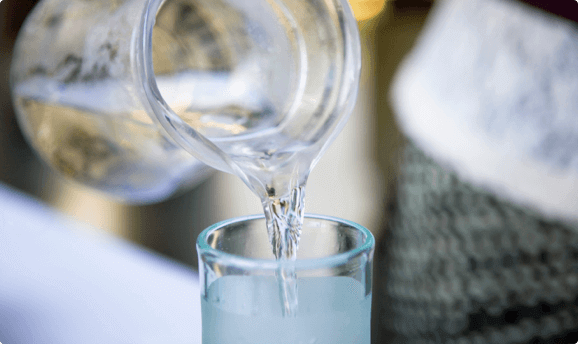 Your water should smell fresh, not damp and aged like it’s been sitting in your basement for a week. While your water will not smell like mold, a musty scent could faintly resemble just that.

If your water smells musty, it could be caused by organics polluting your water.

What you should do if your water smells musty

A solution for removing musty smell is to sanitize your plumbing system, including your water softener, which a water treatment professional can help with. Otherwise follow the process that’s detailed in the owner’s manual for sanitization of your water softening system.

If your home’s water smells musty on a recurring basis, installing a reverse osmosis (RO) system from Brita Total 360 can reduce the odor in your drinking water.

Get rid of those musty smells today.

The reason your water tastes like metal could be because old metal piping has been slowly deteriorating into your water. Manganese, zinc, iron or copper could be rusting away after years of use. Generally, these traces of metal aren’t harmful, but they can add a less-than-ideal taste to your water. Clear water iron in particular is known to have a metallic taste.

There is also a possibility that lead is in the water, though lead is usually without taste or odor. Most cities stopped using lead piping in the 1920s due to its toxicity. However, it took until 1986 for lead pipes to become banned in national plumbing codes. If you have a home that was built before 1986, a filtration system that reduces lead can help alleviate any concerns.

The metallic taste coming from your water could also be a product of a low pH level (less than 7). Low pH means your water is acidic, which can cause erosion of your plumbing and can result in a taste resembling metal.

If looking to balance the pH level of your water supply, you may need a neutralizing filter, which will balance your water back to a neutral pH level.

Reduce lead and lose the metallic taste in your home’s drinking water supply and more with a reverse osmosis system from Brita Total 360.

You would never drink water directly from a pond or lake. There are too many microscopic bacteria swimming around that could get you sick. If your home’s water smells fishy, the same bacteria could be infiltrating your water supply.

Organic matter could be the culprit, such as decaying leaves or broken-down plants.

Contact your water provider if your water has a fishy smell. If you’re on a city water system, local officials are required by the EPA to maintain the levels of organic compounds in the water supply so it’s safe to use.

Whether looking to remove fishy smells, or other smells detailed above, you can also go a step further and take action in your own home by installing a water filtration system. Whirlpool and Brita Total 360 have several options to help filter your water and chase away pungent smells preventing you from using your home’s supply.

Whirlpool and Brita Total 360 have your back for all smelly water issues. You can browse our home water supply solutions to find what’s right for you.

If your water smells like a swimming pool, it likely means it’s contaminated with chlorine. Chlorine is a common contaminant in homes that get water from municipalities, since it’s a proven disinfectant that has been used in cities for more than a century.

Chlorine, which kills viruses, bacteria, parasites, and more, is safe in limited quantities for humans, other mammals and birds. Reptiles, however, along with amphibians and aquatic pets, should avoid drinking or absorbing water that has chlorine in it.

Oftentimes, the biggest complaint with chlorine-treated water is the taste and odor, which can be unpleasant to drink and cook with.

If you continue to struggle with a solution, or need help in diagnosing what your specific issue is, contact a local water professional to test your water.