Free Shipping on All Orders, All the Time | Read the Updated Shipping Notice

What Kind of Salt Should I Use—and How Much?

Investing in a water softener is an important step in protecting your home’s water supply from hard water. But it’s just one step, as water softening systems require occasionally adding salt to their brine tank (sometimes referred to as a salt storage tank) to keep it running.

These softening salt basics—when to add salt, the correct type of salt and how much salt—will all aid in successful water softener ownership.

When Should I Add Salt to My Water Softener?

It’s necessary to add salt to your water softener on a recurring basis. However, it can be confusing to decide when and how much salt to pour into the brine tank.

The first step is to open the cover to the brine tank and look inside. The brine tank must always be at least one-fourth full for the system to run efficiently. If you need to add salt, a good rule of thumb is to fill the tank to at least the halfway point.

Many water softeners have a ‘low salt’ indicator light, but if yours doesn’t, indicators that suggest the level of salt in your brine tank needs to be adjusted include:

For most softeners, we recommend checking the salt level in your brine tank about once per month until you’ve established a refilling routine.

Can you overfill a water softener with salt?

Indeed, it is possible to overfill your water softening system with salt, and that may cause bridging.

Salt bridging is what happens when the salt at the top of the brine tank sticks together to form a bridge but does not drop down into the tank. This means the water softener will run out of salt while appearing full, resulting in hard water throughout your home. To break up a salt bridge, use the end of a broom to gently apply pressure on the bridge, causing it to crumble back to the bottom of the tank. Salt bridging is often caused by high humidity in the install location or by using the wrong type of salt.

What Kind of Salt Should I Use in My Water Softener?

When adding salt to your brine tank, there are two recommended options to pick from: solar salt or evaporated salt.

Solar salt is obtained from the evaporation of seawater and comes in pellet or crystal form. Pellets help reduce the possibility of bridging in the brine tank, which is a key benefit for households that don’t often consume a lot of water. Beyond the pellets helping with bridging, there are no discernible differences in the performance of the two types of solar salt.

Rock salt is a low cost option, but not recommended as it contains higher levels of insoluble minerals than the other two choices. Over time, the use of rock salt can make the inside of the brine tank appear muddy. This will decrease softening efficiency and result in impurities lingering in your water supply. 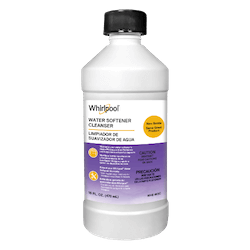